Direct eye contact is one of the golden features of human communication.  We rightly treasure its power.

Suppose you are being interviewed by a newsperson.  You have some experience on a subject that’s recently been getting a lot of attention. But taking questions in a television studio can be disorienting. On the receiving end at home, a video interview seems intimate: a one-to-one encounter with an attentive questioner.  But in the studio the collaborative nature of the medium is more evident. There are multiple cameras and their operators.  Others may be standing standing around. There are also the clutter of other sets and equipment in an over-lit and over-cooled room.  In addition, there is a large monitor not far away that will become a mirror when the interview goes live. Most newcomers are jarred by suddenly seeing themselves in pixels.

Where to look? Where should your attention be focused?  A good floor manager will tell a novice to not let their eyes wonder.  In most cases it’s good enough to keep looking at the questioner as she makes her query. If she’s offsite in another location, the director will tell you to look at the camera.  Eyes focused on the lense makes it seem like you are talking to the viewer directly: a kind of gaze that any television “personality” learns to fully exploit.  And therein lies some magic.

It’s obvious that video is an electronic delivery system that can mimic face to face communication with another person.  It’s nature as a “mass medium” is partly concealed by the illusion of ‘personal’ and direct communication.  And it’s the eyes that dominate. Narrative film is another matter.  An actor who looks at the camera breaks the “fourth wall” and usually spoils the shot.  For live television it is usually the reverse.  And it turns out that just ‘being oneself’ takes some practice; the camera lens is understandably hard to warm up to.

The worst result is a novice who stares at the off-camera monitor.  It makes no sense to the viewers at home unless it is also on camera and displays an image of the questioner.

The key variable here is eye contact. It’s one of the golden features of human communication, at least in American culture.  When you were growing up you probably got unsolicited advice from a parent or relative to make a “good impression” when you meet a person for the first time.  A key part of that little lecture probably included the recommendation to look the new acquaintance in the eye as you shake their hand and extend a greeting.

Imagine fewer online trolls, if they had to utter their words directly to their targets.

Most people in the business of person-to-person contact (think of people in teaching and sales) are practiced in giving all of their initial eye contact to another.  To do any less takes away the gift of attention that they hope will be reciprocated. The absence of full attention on so many digital platforms (Twitter, private texts, e-mails, etc.) degrades communication. For example, imagine the potential decline of online trolls if they had to utter their words directly to their targets.  We also have recent studies noting the “phubbing”–looking at a phone while ostensibly giving attention to another in the same space–devalues the relationship for the snubbed. How could it not?  Denying eye contact to another within a close range is akin to telling them you are at least halfway out the door.  It’s not a ‘message’ most of us want to receive.

Apparently bears encountered in the woods and busy commuters in New York City are not fans of direct eye contact.  So be it.  It’s always best to play by the rules of the locals. For most of us, though, meeting another person’s gaze remains a key part of affirming their importance. 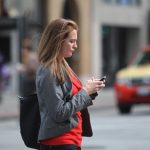