“Biased?” Of Course. We are not capable of neutral observation. Human perception is an instrument of approximation powered by personal experience. It follows that our rhetoric always has ‘tendency:’ personal, political or social. It cannot be otherwise.

There are many words in our language that have outlived their usefulness, but none more so than that old standby, “biased.” We hear it all the time. ‘People are “biased;’ ‘The story was biased;’ ‘The research has a built-in bias;’ ‘His attitude shows a bias;’ and so on. Someone recently reminded me that another project I am working on is “biased toward the 12-tone system of music.” (Guilty, obviously, but annoyed and unrepentant.) And, of course, a given news outlet is said to be “biased” toward Republicans and another one is biased toward liberals. In any conversation about media, the use of the term can take off like popcorn in a hot pan. And, given the lack of precision that usually comes with the ways it is tossed out, its only one more step to note that the ocean has a bias to flood low shore towns, or that dry forests have a bias toward burning. In the interests of full disclosure, I also have a bias toward food. Can’t kick it and won’t try.

The point of all of this is that the term is mostly an empty word being used as an observation. Even if the term was nailed to the floor in the middle of a room with a spotlight overhead and encircled by a velvet museum rope, I’d still wrench it out and toss it in the trash.  It has gotten to be that irritating as an ostensible insight.

The obvious point is that we are never neutral observers. Humans are not measurement instruments. Human rhetoric always has tendency: personal, political, linguistic, or cultural. It cannot be otherwise. There is simply no way to excise bias from humans using ordinary language and preferred behaviors. We can design instruments for precision.  But, except for mathematicians, its not a value we usually emulate.

The problem here is that the user of the term presumes a purer version of events. But even this presumption has a problem.

Since even hard “data” rarely speaks for itself, we must narrate its meaning in ways that justifiably skew in various possible directions. My office thermometer tells me that is 50 degrees outside. But I’m a member of the jabbering species, so I might interpret this simple data to a friend as a “warm” early spring day. That’s a judgment made in relation to the fact that I’m in the northeast, not balmy Sarasota.

The term “biased” is also used as a blunt instrument of dismissal. There is little going on behind the remark other than the obvious point that someone’s narrative doesn’t match another’s preferred narrative.

This means there is nearly always one simple answer to another’s charge of bias. It is a straightforward “of course,” with an addendum: “Could it be otherwise?”

All of this suggests it would be more intellectually honest to not hide behind this one word.  Go ahead and explain the specific attitude or behavior that is bothersome or seems wide of the mark.

Software such as Word, Publisher and Pages have essentially put the tools of newsrooms and their compositor desks on our computers.  First published in 2018, this piece remains a favorite because it blends consideration of the visual and the textual.

Because all of us have become—at least to some extent—“publishers” of materials passed on to others, it makes sense that software such as Word, Page and Publisher have essentially put the tools of newsroom compositor desks on our computers.  My computer is set at a conservative default of Times New Roman, 12 point, originally designed in the 1930s for Britain’s London Times.  It’s the kind of font you might see in a letter from a law office. The point number is indicates the size of the font.  If we bold it, we are adding “weight” to it.  And we can also alter the spaces between letters (called “kerning” in typography).  But add too much, and it looks like you are a M-o-r-s-e  C-o-d-e  o-p-e-r-a-t-o-r. 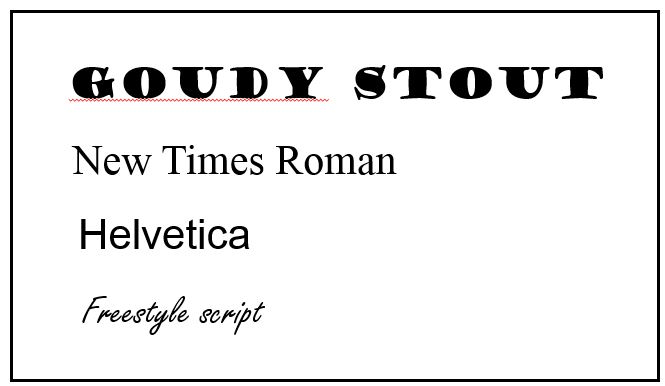 and often rounded font styles, such as Goudy Stout. It suggests an upbeat or playful approach to its subject. But it would be totally inappropriate in most business correspondence.  Similarly, if you are announcing events or designing a poster, you would probably avoid “office” fonts such as New Times Roman, which look old fashioned and formal.  You might consider choices that are more contemporary, like Helvetica, the default choice for a lot of advertising, and similar to the font used in this blog.  Helvetica is a sans font, omitting the serifs, or longer “tails” or “projections” extending out from an individual letter. Freestyle Script is an example of a serif font.  It’s commonly used in invitations and announcements. But written script generally lacks the assertive boldness of a font with more weight, like the terrific and vaguely art-deco Broadway in the “FONTS” graphic at the top right of this post.

Publishers of books vary in their sensitivities to how text sits on the page.  One of the best studies of communication I have ever read–a classic in the field–was apparently delivered as a longer manuscript than the publisher would have liked.  The result was out of character for a mainstream publisher: a cheesy small font with lines seemingly on top of each other.  The author’s wonderful ideas deserved to be better dressed.