We know we’re in trouble when the best he can do is incite more anger, which is about 180 degrees off course from the long-established presidential path of expressing condolences and promising hope.

One of the benchmark functions of the Presidency practiced by all modern occupants is the fulfillment of the role of “interpreter in chief.” We owe the phrase to Mary Stuckey, a presidential scholar, who reminded us a while ago that presidents function in part to explain crises to the American public and suggest ways forward.  This rhetoric always speaks to our better selves and emphasizes widely shared beliefs. Somehow this President sees no need to manage crises by reassuring the public. Indeed, he appears to be among the relatively small percentage of humans who lack the capacity for empathy. He seems to not notice when the nation is grieving.

There is no shortage of good models for this vital presidential function. Think of Ronald Reagan after the Challenger disaster, Bill Clinton after the Oklahoma bombing, George W. Bush in the ruins of the World Trade Center and Barack Obama after the school shootings in Newtown Connecticut.  F.D.R. was famous for his fireside chats, talking the country through the worst days of the depression and World War II. And then there was a grim John Kennedy reminding us of the choices he and the nation faced with the installation of missile bases in Cuba.

Why is Mr. Trump so unspeakably bad at this?

We have sensed the emotional wounds of presidents who have comforted survivors and understood the need to rise above partisanship. The interpreter function is fundamentally about empathy, sympathy, regret, and compassion. It may ask for sacrifice in the name of the greater good. It seeks to unify rather than divide. It asks for patience and tolerance. It projects calm rather than turmoil. It never threatens force against other Americans.

Why is Mr. Trump so unspeakably bad at this?  We know we’re in trouble when the best he can do is incite anger: an impulse that is 180 degrees off course from the long-established presidential norm of promising hope.  Aren’t more than 100,000 American deaths from a badly managed pandemic enough? How many small businesses need to be in dire straits? And doesn’t a history of the murder of unarmed African American men count for something? 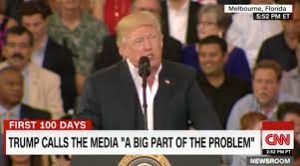 Classic studies of the American Presidency always include detailed histories of the office’s rhetorical style. In the most visible office in the world form usually follows function.  Presidents have always been called upon to find common values and beliefs that transcend regional and party differences.  In the words of analyst Mary Stuckey, the nation’s leader is the “interpreter in chief.”  His (and someday her) job includes finding the common threads of the American experience, then celebrating them in statements and appearances.  Others in Congress may function as professional partisans. But the Presidency has usually found its natural buoyancy when a leader tries to speak for the entire nation. Even past Presidents swimming in private resentments usually managed to celebrate the American experience. Most have not strayed from their constitutional oath to “preserve, protect and defend the Constitution of the United States.”  That includes not just honoring the independence of the press and judiciary, but celebrating the transcendent principles of tolerance and inclusion laid out in the expansive amendments to the Constitution.

Or so we thought.

Nothing stands out more in the Trump administration than his seeming delight it pitting Americans against each other.  To be sure, leaders have been intense partisans. We know from the record that this was true of F.D.R., John Kennedy, Richard Nixon and Lyndon Johnson.  Johnson is an interesting case. The former Senate Majority leader from Texas was an old ‘pol’ in the classic sense of the term. He learned about the uses of power from Richard Russell, an unreconstructed southerner. But he also understood how long-standing problems of race and poverty could be acted on in ways that would bring out the best in Americans. His televised address to Congress in 1965 supporting the Voting Rights Act remains an impressive demonstration of political courage.  In his slow drawl he reputed the racism of his mentor, embracing the promises enshrined in the nation’s founding documents.  Here are a few pieces of that address.

The Voting Rights Act of 1965 is a landmark piece of federal legislation in the United States that prohibits racial discrimination in voting.

It was an electric moment. Johnson spoke to our aspirations rather than our fears.  The act that passed eventually opened up local politics, leading to more registered voters and many more African American office holders.

It’s hard to fathom the horrible fact that some news organizations must supply their own security at Trump events.

Trump’s instincts are much more personal and strategic.  He seeks to celebrate himself more than the diverse corners of American life.  He feeds long standing resentments centered on race, vulnerable new arrivals, Muslims and any number of corporations and sports leagues. Most shockingly, he regularly campaigns against a sacred principle of public life: the value of a free and vigorous press.  He attacks the single feature of American political life that has been most admired and duplicated in emerging societies. His  vile and dangerous claim that the press is “the enemy of the people” is stunningly unamerican.  And from a more legalistic perspective, some verbal attacks at rallies approach the definition of felonious “incitement to violence.”  It’s hard to fathom the horrible reality that at Trump events some news organizations use their own security people to protect their journalists.

What motivates a person who publicly loathes so many?  If governing requires dealing with large segments of society that one finds distasteful, what rewards and motivations can exist?

One explanation from a psychiatrist writing in the New York Times doesn’t include a mental disorder, but a simpler habit of mind. He wrote that Trump has “a personality that privileges destructiveness and revels in the destruction of others and their ideals, whether they be refugees seeking asylum or carefully constructed policies that recognize the danger of Russian aggression.”  He notes that the President is not a “broken man,” but one “fully in tact” who simply gains pleasure from wreaking havoc on basic presuppositions grounding both conservatives and liberals raised in certain protocols and traditions of governing. He’s an anomaly in politics, not to mention the hospitality industry.

Trump will someday pass from the scene.  The more troubling problem is the mounting evidence that too many Americans seem to share his desire to destroy the values of liberal democracy.