In true debates, the press simply listens like the rest of us. In an authentic debate there may be moderators, but not questioners.

The political season always brings out a cycle of “debates” finally agreed to by cautious candidates and news organizations. Though everyone involved has different motives, the one most commonly expressed is that these events offer the public the chance to compare candidates side by side. In the unfettered give-and-take of a debate we are supposed to learn about issues that divide or maybe even unify those running for the same office.

Even so, most of these joint appearances fall short in testing persons and ideas. As usually formatted, they can’t achieve these lofty goals, for two reasons.  First, the response times for individuals are always too short, often a minute or less. Bernie Sanders is right to call them “demeaning.” And second, for no valid reason the press wants in on the action as well.  The quid pro quo is free airtime, if they can be part of the show.

Ideally, debates should deliver what philosophers call “dialectic:” a purposeful clash of views where claims and evidence are tested against a series of counter-arguments. Among others, Aristotle was certain that acts of public advocacy had a cleansing effect on the body politic. He believed we are wiser for subjecting our ideas to the scrutiny of others. This may sound lofty and abstract, but most of us do a form of this when we talk through a pending and important decision. We often want friends to help us see potential problems in a planned course of action.

In open societies such as ours we expect to hear contrasting opinions. It’s a wonderful process when it’ well-formatted. Otherwise—and as devised by most political operatives—a political debate is usually is little more than a joint press conference.

The candidates share part of the blame. They usually fear these exchanges. They and their staffs believe that a serious gaff can sink an entire campaign. So they hedge their bets. They agree to “debates” if they are moderated by a panel or at least a single journalist. The logic of journalism is to ask new questions at frequent intervals. This is when the process begins to go south. It’s further doomed when each side is given only a minute or so to respond. These errors are then compounded with a final counter-response that is barely the length of a sneeze. As it now exists, it’s little more than a lukewarm form of political theater.

A good debate will have no more than a moderator or time-keeper to equalize participation and keep things civil. The advocates directly address the claims and arguments of their opposites on what is usually a single broad but important subject area. Their opening remarks must be permitted to be longer than a television commercial. They then listen, refute, question, and challenge each other. When one issue seems to have been exhausted, the moderator may steer the pair to a related issue and then get out of the way. 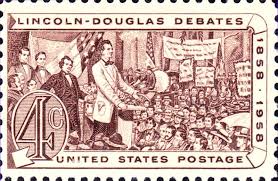 Lincoln and Douglas debated for hours by themselves without the assistance of others. Indeed, a prime form of Saturday night entertainment in the nineteenth century was a formal debate in a town’s biggest venue. The whole process of seeing two leaders explain their ideas under the scrutiny of an interested audience could be invigorating. By contrast, the short question-based formats commonly in American political debates generally ruin the chance to see how much a candidate truly knows, beyond the memorized sound bites that they repeat at every stop. Just when follow-up rebuttals might begin to test a candidate’s knowledge of an issue, the questioners usually interrupt and move on to a new topic.

Several years ago Americans could catch a series of debates in the United Kingdom between Alistair Darling and Alex Salmond on Scotland’s referendum to go it alone as an independent nation.  Scotland ultimately voted to stay: an outcome that might not hold these days, given their current displeasure with London’s intention to leave the E.U.

The original debates weren’t perfect by any means. But these televised clashes had the advantage of allowing both sides sufficient time to make essential arguments and extended refutations. As can be seen with the never-ending Brexit debate, the British expect that members of the government and individual M.P.s will be able to stand up under sometimes challenging counter-arguments from their ideological opponents.

Debates should extend beyond glib assertions of support or opposition.  In the United States we rarely let candidates go on long enough to discover if they have confronted the full consequences of their positions.

We don’t need Professor Harold Hill to tell us there are troubles right here in River City.  Indeed, the existence of a pool hall seems to be the least of them.

One of the oldest and most recognizable rhetorical forms is the jeremiad, which is a warning or a call to action for others to change their ways. Jeremiads are a popular form of public rhetoric, seen and heard in news columns, religious tracts, documentaries and political speeches. And then there is your insufferable Aunt Tilly. The best we can do is suffer through her endless admonitions. Jeremiads typically describe a whole cluster of problematic habits or behaviors, which I suppose can be seen as a sign our abilities to imagine the world as it might be.

In short notice any of us can emit a jeremiad.  For some reason it can feel good to tell others they are on their way to one of the circles of hell.  The form is named after the Old Testament prophet Jeremiah who condemned idolatry, corrupt priests, and those who would sell themselves as “false prophets.” Sin travels hand-in-hand with the cautionary warnings of proselytizers.  And so it is with their secular counterparts who thrive on doomsday warnings that others seem unable to heed.  My best childhood memory of church was the booming voice of J. Carlton Babbs reminding his Methodist flock how very near we were to the precipice.

If this all sounds a bit self-righteous, it surely is.  But jeremiads also provide the necessary churn to prod the rest of us to consider the consequences of our actions. We don’t need the reminders of Professor Harold Hill to tell us there are indeed troubles right here in River City.  Others are eager to pitch in to feed our natural meliorism.

The young have an aversion to jeremiads as much as the old are compelled to issue them.

Those of us with an abundance of judgments about how the social order should work are eager to tell others what they are doing wrong.  For reasons not clear to me, this rhetorical gene seems to especially thrive in men. Freely sharing opinions is a masculine trait.  We can cite the Puritans in early America.  But we could just as easily point to many of our contemporaries who take to jeremiads like fish to water.  We usually think of older evangelicals that have any number of warnings to offer to their straying flocks.  But think, too, of a broad tradition in liberal politics, well represented by Bernie Sanders or the iconoclastic writer, Chris Hedges, both of whom describe current economic, foreign policy and healthcare policies that will lead the nation to ruin.  As befits their unsettling nature, the best jeremiads give us no comfort because we know that they are probably justified.

Even this blog indulges in its share of fire and brimstone religious tracts. The constant complaint here that distraction is the communication malady of our age represents a difference in kind, but not in form.

The young have an aversion to jeremiads as much as the old are compelled to issue them. Cautions on behavioral and lifestyle choices receive a chilly reception from teenage audiences who have often been inoculated against hearing yet more advice.  Some interesting recent research suggests that even peer-to-peer appeals for such basic forms of self preservation such as lowering the volume levels of headphones typically fall on those ostensibly damaged ears.  Newer members of the human race are not all that interested in hearing how older generations became sadder but wiser. It is probably some mysterious generational thing.  But it is also an understandable impulse that the young would like to make their own mistakes.