No one will look at the output of the West Wing in the last four years for words of inspiration.

I’ll leave it to others to sort out the politics of our disheveled presidential campaign.  But we already have more than enough evidence to examine the ruins of something called “the Rhetorical Presidency.” The idea loosely encompasses the norms and traditions that have usually governed the occupants of the White House, at least since the Presidency of FDR. The Rhetorical Presidency includes the public statements and direct addresses made by the figure we used to call the “leader of the western world.” There may have always been a bit of hubris in that name.  But it suggests that the communications coming from the White House were often meant to represent the ideals of governance in a democracy.

We acquired some wonderful traditions from occupants who came in the last century, including Lincoln, Teddy Roosevelt, John Kennedy and Lyndon Johnson. All are part of a tradition of using the office to urge the nation to focus on issues beyond their own personal interests. Think of inaugurals, state of the union address, oval office addresses, responses in times of tragedy, and formulations of progressive actions that could be effectively interpreted to the nation.

Generally, the Rhetorical Presidency represents a desire to weave the nation together as a national community sharing common goals, and it has fulfilled that ideal by leaving a legacy of public rhetoric that is more inclusive than divisive, more focused on shared ideals rather than divided loyalties, and usually resolute in not using the “bully pulpit” to demonize or denigrate other Americans.

Trump has used his office to demonize enemies and exercise his voracious appetite for fantasy over policy.

You can see where I’m going with this. If the condition of the physical structure of the White House could represent the current state of the Rhetorical Presidency, we would have to imagine a building ready to be condemned. Its columns facing Lafayette Park would be buttressed by metal scaffolding. Some of the tall windows would be broken and covered with bare plywood. Raw plaster would cover expanses well beyond the porticos. And badly fitted blue tarps covering leaks in the West Wing’s roof would also contribute to the look of an institution that has seen better days. This is the Trump legacy. More than any other modern leader of this republic he has used his rhetorical power mostly to demonize enemies and exercise his voracious appetite for fantasy over policy. The United States Printing Office issues a nicely-bound annual Public Papers of the Presidents for libraries. But no one will look at the output of the West Wing in the last four years for inspiration. If the best presidential rhetoric suggested fair-minded and moral leadership, the recent inability of the current holder to even condemn white supremacy groups speaks to how diminished this vital feature of the Presidency has become.

Not long ago a President was the first mental construct children had of their government. It was safe to allow them to listen to his (and someday her) words. To be sure presidents could have bouts of temper. Harry Truman wrote angry letters, and then never mailed them. John Kennedy mostly confined his public anger to a hapless steel industry trying to raise prices in the midst of high inflation. And Richard Nixon said a lot in private but taped that “decent” family papers in the 1970s couldn’t print. But to a person, they tended to use their public utterances to speak to the shared aspirations of the nation.  Even in the already hopeless early years of the Vietnam War, Lyndon Johnson could still rise to the occasion and scold his Southern mentors hesitating on legislating for true racial parity. On the evening of March 15, 1965, Johnson told a special meeting of Congress the time had long passed to approve a Voting Rights Act with teeth. It was a long speech that was a national lesson in tolerance, ending with a phrase associated with Martin Luther King:

What happened in Selma is part of a far larger movement which reaches into every section and state of America. It is the effort of American Negroes to secure for themselves the full blessings of American life. Their cause must be our cause too. Because it’s not just Negroes, but really it’s all of us, who must overcome the crippling legacy of bigotry and injustice.

And we shall overcome.

This was a very imperfect man still able to find the right words  to push an imperfect nation to do the right thing. That is what the Rhetorical Presidency could be about.

I miss those days. 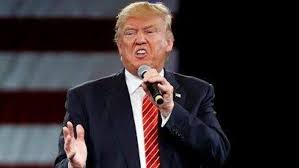 If Trump’s words were matched to the right setting, we might need to find an abandoned schoolyard somewhere.

Most students of argument learn early that among the many kinds of common fallacies we inflict on each other, the most egregious is the Ad Hominem argument.  The term designates a simple but reprehensible pattern: denigrating or criticizing an advocate rather than their ideas.  It’s essentially a smokescreen used by someone who is lazy or mean-spirited. The form usually comes in the form of a counter-argument of sorts, but it follows an illegitimate path.

You already know where this is going. While students rightly recoil at the mere suggestion that they might use this form, we can’t say the same for a leader who should be setting an example for the rest of us. This once rare infraction in public discussion it is now on its way to becoming the default mode of response.  And our President should get most of the blame.

Somehow this elemental lesson on the ethics of argument is lost on Mr. Trump.  His daily rhetorical output almost always include at least a few barbs and personal slights directed to those he disagrees with.  Every day is yet another example of how to obfuscate an issue behind a blitz of name-calling.

No insult comedian can touch Trump’s streak of meanness.  Favorite pejoratives directed to people include “loser,” “bad,”  “dishonest,” “clueless,” “low class slob,” “phony,” “a zero,” “a weirdo,” “a clown,” “ a dummy,” “a flunky,” “sloppy,” “gruby,” “a spoiled brat,” and so on.  The New York Times has counted nearly 600 discrete pejoratives  with like these, most substituting for what should be more substantive counter-arguments. Interestingly, his kind of talk would have him ejected from a lot of deliberative bodies in most other democracies.

It’s another reason to lament the loss of a figure like Congressman Elijah Cummings.

One suspects Trump lacks even the elemental will to engage with an idea by arguing a well-formulated position supported with evidence. Apparently, the easiest simple-minded alternative is to call his opponents names: a pattern that is still jarring to hear in the confines of the White House.

Given the pervasiveness of this style, our public rhetoric will pay for this race to the bottom. And it’s another reason to consider what it means to lose Congressman Elijah Cummings, who passed away a few days ago. The eloquence of this important leader in the House of Representatives graciously celebrated the values of integrity and decency.  A practitioner of the spacious old rhetoric of inclusion, most Americans felt better for having heard his affirming words.

Cummings’ style was a long way from the trash talk of the current President.  If Trump’s words were matched to the right setting, we might need to find an abandoned schoolyard nearby.  Then the President could utter his tantrums where they belong: somewhere between the broken chain-link fence and the graffiti-laden basketball court.