At best, compliance is only a pale halfway step in the direction of where an advocate wants to take their audience.

The effects that individual messages have on others are often characterized by descriptors on the far margins.  We say a person is “persuaded,” or they are not.  We note that someone has “understood” a message, or they did not.  We pay attention or we don’t. It’s a function of our language of binaries to characterize communication only at the ends of various continua. When we talk about ideas in the abstract we are a bit less likely to look at effects distributed in between pairs of opposites.  It’s one of the advantages of survey and experimental research that the middle ranges finally get their due. But without research results to report, we revert to simpler reference points.

In studying how people are persuaded, we are lucky to have at least one term that suggests a realistic middle ground between “convinced” and “not convinced.”  We may see them as “compliant.”  A person in compliance seems to be taking on the behavioral attributes of someone persuaded, but the fine-grained meaning of the term also includes  the possibility that they are not fully convinced. They are still acting to carry out expected roles, but are perhaps seeking a way to avoid a more volatile  ‘stand your ground’ disagreement.  If you have a teen, you know this state when he grudgingly takes out the garbage or mows the lawn.  The behavior is present, but the attitude is still a work in progress.  Ideas like “duty,” “obligation,” and “required” are likely descriptors of compliant behavior.

You know the same state from watching yourself.  Someone wants something from you, and the calculation is to at least outwardly give it, even though you remain mostly unconvinced.  A relative wants you to attend a party you would just as soon skip. A friend explains their theory of price-fixing among competitors in an industry, and you find it easier to nod in apparent understanding, even while you doubt that he or she is correct.

On one hand, compliance is a courtesy: a half-effort to oil the social machinery and not create a rift with another person.  One the other hand, it’s usually a false signal: a momentary suspension of deeper or truer feelings. And so it happens that we get a commitment from another in a passing conversation that later falls short when they must actually deliver on their seeming agreement. This is the downside of compliance. It’s a low bar. Instead of a desired level of conviction that comes with authentic persuasion, you frequently get action that is grudging or a one-time-only change.

Understanding compliance ultimately is helped by a firmer effect several steps higher we can call conviction. A person with conviction is usually seen as having a firm allegiance to particular view or type of behavior.  For them the issue is mostly settled.  Conviction functions as kind of a lock that makes us resist efforts to change our commitment. Deep conviction is a motivator, representing perhaps the ideal of what an advocate would like from another person.  We frequently “perform” or convictions to others, using language and an animated self to show how settled our views have become.  On the other hand, compliance may be revealed in some circumstantial cues like less eye contact, more distance between the communicators, a three-quarter stance that puts the receiver on a different sightline, and a flattening of the receiver’s affect.

Change is always is a lot to ask from someone who is undecided on a point, but its existence is a reminder that compliance is, at best, only a halfway step.  Think of conviction as Robin Williams.  He was all in when he did anything.  Compliance is more like a timid guy in the corner hoping not to be noticed. 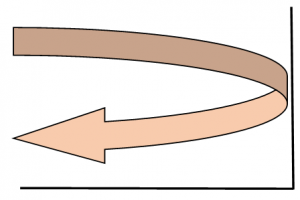