The man with a gun is a familiar American stereotype. Guns are enshrined in our history, art, and even laudatory self-definitions.

A lot of our friends around the world must wonder why we Americans are so willing to tolerate the murder of innocents brought down by private arsenals of weapons. Many warn their citizens about the risk of getting shot while visiting the United States. The nation is awash in guns that would never be used for authentic hunting. Yet, we continue to invoke a “personal freedom” and a misreading of the badly-written Second Amendment to mitigate our own cognitive dissonance. As we like to point out, our national history was secured by people willing to look down the barrel of a rifle.

More than most nations, the U.S. has been defined by lethal firearms kept by ordinary citizens: muskets in the revolutionary war, rifles during the western expansion that ostensibly “tamed” the prairies and its native populations, and military arms from the “arsenal of democracy” that now serve a useful purpose in Ukraine. But as sure as darkness follows day, we must add the private armories of citizens frightened of sharing the culture with those of a different hue. Virulent nativism is again rampant in the United States, and legally purchased pistols and automatic weapons regularly show up in the hands of recluses in Buffalo, Pittsburgh or Las Vegas, most festering with conspiracy fears.

As a child of the west, it was my birthright to have a toy six shooter by the age of 6 and a BB gun soon after. By the time I was in the Scouts, I and my peers were routinely sent to the shooting range for lessons with the NRA on how to handle a rifle. Even Disney reminded us that every homestead needed the protection of a good man like Davy Crockett, who could shoot straight and protect lands that needed to be “settled.”  The cycle for many young men is now completed with gun shows, shooter games and live or filmed war reenactments. Those without the benefit of the communication skills that come with social intelligence are especially primed to game their way to the idea of a  quick “solution” to perceived grievances.

Too many take comfort in the American catechism of the “right to bear arms.”

The man with a gun is a familiar American stereotype. Guns are enshrined in our history, art, and even laudatory stories we tell about ourselves. We can see it in the monumental frieze ringing the Capitol Rotunda (above), in all of the video cowboys of the 50s and 60s and modern versions of the same genre. The film character Alec Baldwin was portraying in the ill-fated Rust aimed for show but killed for real. That accident repels, but—given the American narrative—never quite enough to unseat the attractions of yet another story about the wild west.

If we could think of our society as a person, we might imagine it as suffering from an incurable addiction to mostly sentimental narratives stitched around a misunderstood foundational document. This addiction is fed by stories of shooters and redeeming enforcers, but none of the fiction can match the horror of 211 American mass shootings so far this year.1 So, we mourn the children and adults bleeding out on the floors of schools, stores, and churches.  And we muster anger at the rare, lethal and deranged Americans that see a gun as a tool of self-expression. The bad guys in other modern societies like Norway or the U.K. are mostly captured by unarmed police. But in our stand-your-ground culture, criminals–and those among us who anticipate that they might be their victims–are armed to the teeth. The local bait shop in our affluent nearby town of 500 not only sells fishing supplies, also Glocks and ammo as well.

Addictions are notoriously difficult to break. And in our media we continue to celebrate the history and lore that is constructed about the nation’s many violent conflicts. They have become a buffer against accepting that our addiction to the bullet is any more serious than other human frailties. Even against the wishes of many Americans, we don’t seem to have the political will to disarm. So our recidivism is guaranteed.

A large segment of the political class has learned to look away, or to recite the familiar litany of prayers for the innocents on one day, while some return to stoked-up racial fears the next. Even though too many have lost their birthright freedom to live, most of the rest of us still take comfort in the tired catechism of the “real” freedom in the “right to bear arms.”

Most cultures would not tolerate a policy or cultural routine that enables the massacre of its citizens. But it seems that we have our reasons. 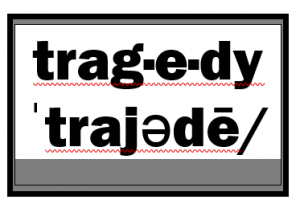