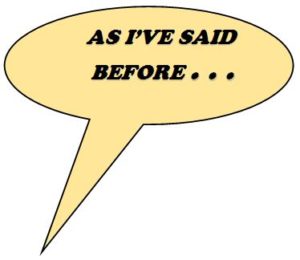 These mental cheats sacrifice accuracy for the rhetorical advantage of certainty.  And that’s more than we should accept.

It’s not unusual to catch someone’s thought in mid-flight that deserves an arrow that will bring it back down to earth.  Habits and overuse make it easy to overlook vapid phrases that pretend to pass as insights. In complex times like these they tend to do violence to the Truth, which needs much more context and detail.

We know when we say it or hear it that we’ve probably uttered a useless overstatement.  But its declarative certainty is attractive, and maybe a good way to foreclose debate.  But humans have grown smarter over the years about the complexities of living and interacting with others.  Einstein famously noted that “as our circle of knowledge expands, so does the circumference of darkness surrounding it.”  More knowledge makes us aware of a bigger spectrum of unknowns.  We are wiser by grasping the limitations of simple nostrums.

When someone issues this phrase it’s usually a hammer blow for subtlety. Imagine the phrase tacked on to these common thoughts:  People aren’t trying if their marriages don’t work. . .  Teens are obsessive about sex. . .  New Yorkers are pushy. . .  World War II was started by Germany . . . , and so on.  None of  these claims have earned the right to be worded as unequivocal.  We may not know everything these days, but we should know that the actions of humans and organizations are rarely explained with one dimensional understandings.

I’m guilty of saying this.  But, in fact, the task of accounting for human action is arguably harder than working with the predictable usually effects found in the physical sciences.  To be sure, we are right to be impressed with scientific achievements.  Many of us were stunned to see the three SpaceX booster rockets that went into space recently and then returned to land feet first on the launch pads where they started.  Wow.  (Here’s the clip, if you missed it.)  But the laws of physics and the behavior of machines usually make it possible to produce results that can be replicated.

Put another way, the sciences are assisted by unequivocal baselines.  And that makes events more orderly.  But try accounting for where a cat will light after circling a room, or why your Uncle Mort insists that raw celery is the world’s best food. In these realms we are talking about nearly infinite causes that may never be known.

In all likelihood, you probably don’t.  We’ve learned a lot about the natural fallibility of memory.  We may indeed “see” distant events or feelings with what seems like pristine clarity.  But memory research has advanced to a stage where it is sensible to call into question those things about which we remain all too certain.  For example, there is increasing evidence that eyewitness accounts in trials and routine police work are more inaccurate than we used to expect.  Or try this test: visit your old grade school, or a neighborhood  that was home several decades ago.  Putting aside various improvements, some features that seemed so vivid will probably be different than you may recall. The house I lived in as a pre-teen now looks so much smaller than what I remember.  And what happened to what I remember as a spacious back yard?  The question to my siblings is always “How did we all manage to fit?”

Cable news hosts are fond of turning to a fellow journalist on camera to ask this obvious question.  They are surely right to ask it.  But if postmodernism has taught us anything, it is to look for broader and multiple narratives.  The problem with the question as worded is its singular form.  Human events should  lead us to expect stories and alternate narratives.  Almost any complex human action is likely to produce different versions about was actually going on.  Facts and features of narratives almost always spring from selected elements, different perspectives, and points of view we are predisposed to confirm.

All of these phrases are mental cheats. They sacrifice accuracy for the rhetorical advantage of certainty.  And that’s more than we should accept.