[We have a President who is shameless in shifting the blame for our national woes to everyone but himself. This is a human habit we all have from time to time.  But rarely has a national leader so consistently sought the rhetorical cover of some other group’s malfeasance.  Here’s one theory for it.]

The master-critic Kenneth Burke was a great observer of our communication routines, and never more so than when he described the “scapegoat principle.”  For most of us working to understand why we say the things we do, this familiar rhetorical form is a frequent reminder of the psychological benefits of transferring guilt to others.

Burke noted that groups or individuals face two options when a decision or action didn’t turn out as well as they wished.  If we screwed up, we can accept responsibility and note with regret that our efforts failed to work out.  He called this the “mortification” option, as in “I thought I could fix the bad feeling between Bill and Fred, but I think I just made it worse.  I’m not very good at playing the role of mediator.”  But doing this, of course, carries no obvious rewards, and requires a certain degree of grace and humility.

So we usually opt for the second choice: we scapegoat the problem to others.  It’s easier to blame Bill or Fred because doing so is an act of personal redemption.  In this form our words are all too familiar: “Things are not going very well in my life right now and it’s her fault.”  Like a fast-acting pill, the shifting of unwanted effects to others lifts us from the burdens of self-examination. In Burke’s language, we have “cast out” the problem.  Perhaps this is why we have parents, pets, uncles, Republicans, socialists, college professors, Iranians, labor unions, members of Congress and in-laws.  We can feel better when we believe that others are worse.

Most forms of scapegoating have a familiar ring:

Tribes have always used sacrifices to purge the group of its problems. The usual victim was a four-legged animal that would be sacrificed to cleanse away problems usually caused by other humans. In the 21st Century we are less likely to round up a hapless critter for this ritual “casting out” of guilt. Instead, we usually pick a plausible member of our own species and simply attribute our problems to them. Think of internet trolls and their venom.  Anonymous comments online represent a perpetual Lourdes of guilt transference.

It would be nice if we could chalk up this human habit as but a small foible in the species. But the consequences of blaming others can’t be so easily dismissed. It’s worth remembering that Hitler’s murderous purge of supposed “non-Aryans” from German society—first with words and later with death camps–was fresh in Burke’s mind when he summarized the scapegoating principle. 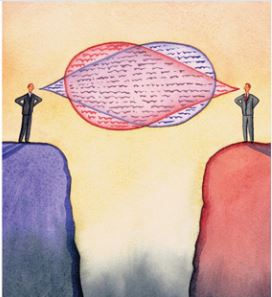