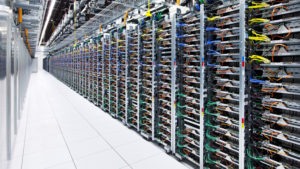 Think of a server as something like your cable box.  It’s probably always on, always warm, and usually has a cooling fan.  Now add 80,000 thousand more for one location.

Communications equipment isn’t particularly known for creating excessive amounts of pollution.  But we may need to reconsider that view.  Unfortunately, our language isn’t very helpful.  “Cloud computing” may be a boon to organizations and internet-based businesses.  But its clear that what we are really talking about is server farms firmly planted on earth, often in the Southwest, but spreading to other locations as well.  The “cloud” sounds so. . .well. . .innocent. It’s our habit as Americans to put a gloss on what is usually a harder reality–like the euphemism of “bringing justice” to Iranian general Qasem Soleimani rather than naming the harder truth that the United States assassinated him.

Imagine a server farm the size of a shopping mall, with thousands of separately powered electrical units generating heat that needs to be controlled. As with other industrial processes, the shortest route is no longer opening a window (dust, you know), it’s building huge cooling units that usually sit on a corner of the site.  It’s the part of the site with machinery that is clearly on the outside of the structure: cooling units, large insulated pipes and standby generators. This section is filled with energy-thirsty pumps and large heat-exchangers.  It’s one thing for a boxed toaster to sit on a shelf until needed in an Amazon warehouse.  No special air handling is required to store it. But Amazon’s servers, along with Google’s and others, need to operate in conditions that will not melt down their circuitry. Think of a server as something like your cable box.  It’s probably always on, always warm, and usually has a cooling fan.  Now add 80,000 thousand more for one “farm.” The units obviously burn energy as they work, with heat as one of the largest side effects.  The need for cooling makes two forms of pollution.  Now add a third.

We are swimming in a sea of racket.

As a homeowner, you may be in for a surprise if you live in an area where server farms operate.  There is growing evidence that the pumps for cooling not only generate chilled air, but a fair amount of infrasonic noise.  This is the kind of low noise that approaches the point where the ear passes off the responsibility of detection to the body.  We can feel some infrasonic noise.  And that’s apparently what’s happening in the Southwest, where residents complain about a very low hum that never stops and is not easily blocked by routine building materials.  Bianca Bosker recounts the stories of some residents in Chandler Arizona in her recent Atlantic article, “Why is everything getting louder?”

It would not be true to say that server farms are the worst polluters. Indeed, in the 19th century you could identify towns like Lowell Massachusetts or Pittsburgh Pennsylvania or Dearborn Michigan by the rumbles of their heavy industries and the dirty air.  Smoke was the most visible form of pollution in these places, and few then considered the equally destructive effects of this newer culprit of industrial noise.

But our day of reckoning is here.  Partial deafness in older Americans is now as much a certainty as wrinkles. We are swimming in a sea of racket made worse by devices that have almost made it impossible to remember what quiet sounds like.