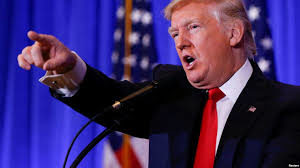 Standards for judging a President vary enormously. Usually the ire of critics is directed to acts that—though often well intentioned—fall far short. JFK went ahead with previously drawn plans to invade Cuba in 1961.  The result was the ill-fated Bay of Pigs Invasion that was a complete organizational and military fiasco. Years later Richard Nixon sent his Vice President out to public even events armed with criticism of the media, sometimes using the baroque words of speechwriter William Safire.  Who will ever forget the unintentionally funny charge that the press was made up of “nattering nabobs of negativism”?  To be sure, Nixon hated the national press.  But he mostly confined his hatred to private diatribes in the Oval Office.

Most hear his intemperate words with regret; a few dangerous others seem to hear a call to be a soldier in a purification crusade.

The point is that few observers of the Presidency have had to worry about gratuitous public abuse of others, which is incidentally enshrined forever in library-bound editions of the Public Papers of the Presidents.  Petty, mean-spirited and racist broadsides are now part of the official history of this great nation. It can hardly be surprising that we are beginning to see  more attacks on his political opponents, allies, immigrants, the news media and countless other groups named in Trump’s thoughtless tirades. And while a lot of racist and violent acts should not be laid at the feet of this President, it’s not unreasonable to conclude that his intemperate rhetoric has sanctioned some of them. Cesar Sayoc mailed pipe bombs to a Trump hit list of opponents from his home in Florida. The banners covering Sayoc’s van are a traveling road show of Trump’s machismo bluster. It’s not unreasonable to assume that he believed his lethal explosives were helping ‘make America great again.’ Anti-Semite Robert Bowers who killed worshipers in a Squirrel Hill synagogue was apparently angry at Trump for being too moderate. At first it this awful massacre would seem disconnected from the vitriol flowing from the White House, until one ponders the effects of rhetoric that implicitly sanctions the abuse of any minority.  Trump plays the same tired American nativist card repeatedly: a problem in our long past that even Teddy Roosevelt tried to end.

Last July the New York Times publisher, A. G. Sulzberger, visited Trump and cautioned him that his attacks specifically on the press were going to get someone killed. “I warned that this inflammatory language is contributing to a rise in threats against journalists and will lead to violence.” No one paying attention to Trump’s language could think Sulzberger’s concern about incitement to violence was unjustified.

As mean-spirited as Trump has turned out to be, the real surprise is how many Americans seem to share his iconoclasm.

In the United States a charge of “incitement” to lawless action is on the softest of legal ground.  The First Amendment rightly protects even provocative speech. That’s as it should be.  On the other hand, having seen Trump at numerous rallies abusing the press corps just a few feet away (“fake news media!,” “trying to take away our history and heritage!,” “sick people!,” “they don’t like our country!,” “enemies of the American people!”), I have no doubt that any other speaker would have been warned by local law enforcement to moderate his fighting words.

As mean-spirited as Trump has turned out to be, the real surprise of the last several years is how many Americans seem to share his iconoclasm.  Most of us who have spent years studying the Presidency always assumed that the nation’s commonplaces of tolerance and goodwill would carry the day. No one would want to burn down the house in order to save it. Most presidents have understood that the oath of office obligates them to voice the familiar tropes of cooperation.  Lincoln’s famous warning that “A house divided against itself cannot stand” seems newly relevant and stunningly unheeded.

Few modern leaders seem to revel in turning crowds into mobs.  Is Donald Trump’s indifference to his coarsening language the result of an easy life made possible by too much power or his easy access to wealth?  Whatever the cause, adding a level of narcissism matched by a deficit of empathy makes this President a truly lethal man. Most hear his intemperate words with regret; a few dangerous others seem to hear a call to be a soldier in a purification crusade.